On July 24th, we joined Mason Drost at the Sac County Fair where Mason was showing off his newly restored 1961 John Deere 3010 tractor. The John Deere 3010 was placed in the poultry barn at the Sac County Fair; surrounded by chickens, turkeys, and ducks making talkative chatter as fair-goers took in the 4-H and FFA projects. Hy-Capacity supports 4-H and FFA students like Mason through our Iowa FFA Seat Program. As a contribution to Mason's restoration project, Hy-Capacity donated a restoration grade seat. Mason is a part of the Wall Lake Bandits/Viola Visions 4-H chapters. 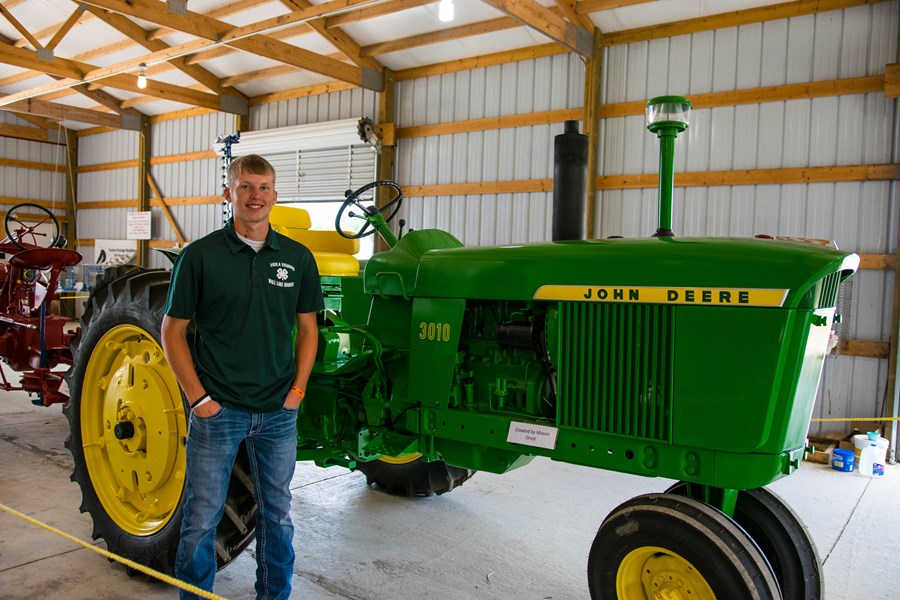 Mason will be a senior at East Sac County High School. "After high school, I'll probably plan on either going into construction or welding or something along the agriculture lines," said Mason. Mason also plans on taking over the family farm once it is time.

The 1961 John Deere 3010 has been in the Drost family for many years. "It was owned by my great uncle's dad- he bought it used, and it had a Westendorf loader on it,” said Mason. The original owner of the tractor was Theodore Smidt. The tractor found its place with Theodore Smidt’s son Wayne Smidt. “And my dad, in 1981, started renting his[Wayne Smidt] ground and farming and he used this tractor over on his farm," said Mason.

"Eventually in 1992, my dad bought it [the tractor] off of him,” said Mason. Mason’s father, Wes, had cattle over on Wayne Smidt’s land, so the tractor stayed on Wayne’s land for the time being. “He used it to feed his cattle and eventually brought it over to our farm,” said Mason.

"When I was little, I would go over and feed cattle on this tractor with my dad," said Mason. Mason talked about how he has always been partial to the John Deere, the only green tractor among their fleet of Allis Chalmers tractors.

Eventually, the 3010 made its way into retirement. "It went in the shed because it had some problems with it. There it sat," Mason said. The 3010 stayed in that shed, decaying for years before Mason and his father pulled it out this year to begin work on it.

Mason’s father, Wes Drost, said to Mason, “Someday this will be your tractor when you get old enough.” During his junior year of high school, Mason remembered the green machine sitting in the shed and said to his father, “We should restore that.” Agreeing, Wes said, “Alright, I guess you’re old enough.”

"It had clutch problems...the fuel pump was messed up...and it had some tuning issues," said Mason. With time and dedication, Mason was able to turn the 3010 into a working machine. "It's a lot of hard work that goes into it. At first, it was all dirty, and that's probably one of the most tedious tasks is getting every nook and cranny clean in that thing. And it's hard," said Mason.

“I think the most rewarding part is learning the whole process of it because this is my first time restoring a tractor. It’s just kind of cool watching it progress as you go along and the outcome is just amazing. I love the outcome. It’s crazy how big of a difference it is,” said Mason.

Once the tractor was complete, Mason's great uncle, Wayne Smidt, was reunited with the tractor that had formerly belonged to his father.

Now that the John Deere restoration is finished, Mason may connect it to a square baler or an auger. Mason also plans on driving the tractor in parades.

Mason also dedicated his time this summer to prepare his pen of three for the Sac County Fair. "A pen of three is three cows that you feed, so they're about the same weight," said Mason. After they are taken to be butchered, Mason will get judged on the weights of the cows and how well the meat cut.

When Mason's brother is old enough, he plans on restoring the family's 1954 Allis Chalmers WD45 for the Sac County Fair. “I just think that it’s a great process. It’s something that I think everyone should do," said Mason.