The "Generations" of Hy-Capacity 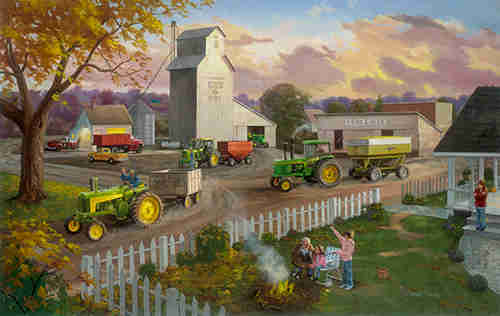 "Generations" was painted by well-known Iowa artist, Charles Freitag, in 2006.
"Generations" is one of several paintings that Freitag created for Hy-Capacity, incorporating some of the people we hold dear here at Hy-Capacity.

Scratch Olson, Steve Olson, Molly Varangkounh, Claire Varangkounh, and Sophia Luu are all shown in this print. The title of this artwork is “Generations” because it features four generations of the Olson family. Scratch Olson was the main founder of Hy-Capacity back in 1978. Steve Olson is the current owner and CEO, while his daughter, Molly Varangkounh, is the company’s President. The fourth generation, Claire Varangkounh, also works part-time in the Marketing Department. Steve has been a part of the company from the start in 1978, Molly has been working since 2001, and Claire started in 2017 during her sophomore year of high school.­­

The tractor in this print is a John Deere 630. A few of the most popular parts for this model are the Alternator, Water Pump with Pulley, and Black Vinyl Cushion Set.

Steve Olson is shown in the yard roasting marshmallows with his granddaughter, Claire, and neighbor, Sophia. Originally, Steve didn’t want to be featured in any of Freitag’s paintings. However, he said that he would only be in it if Freitag also included a fire.

Molly Varangkounh is standing on the steps to the house in this print. She wasn’t planning to be in this painting, but Freitag must have snapped a picture of her to add to it. Molly, at the time, had two daughters, and one on the way.

Molly’s oldest, Claire, is seen sitting in the chair by the fire, next to her grandfather. Macey, her second daughter, would have been around 18 months old. She isn’t featured in this print because she wouldn’t sit still long enough for Freitag to get a picture of her. Because Macey couldn’t be in the painting, we asked the neighbor’s daughter, Sophia Luu, to be in it. Her father, Binh Luu, has worked at Hy-Capacity since 2004. Sophia is shown standing by the fire waving to the man in the other tractor. The man in the tractor was someone the artist painted, not anyone we know.

There are some hidden features in this print, as well, including the buildings in the back. Behind Feed & Seed is a former John Deere Dealership that has been restored converted into Rustix, a restaurant found in downtown Humboldt, today. Hy-Capacity was also painted in the background of this print, along with the mouse that is included in many of Freitag’s paintings.

Keep an eye out for more articles on Freitag prints!